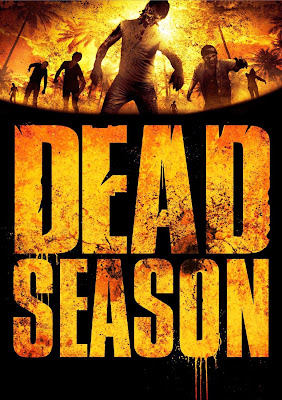 Tagline: On this island, survival is no game.


The Film: Personally I don't need a zombie film to be necessarily epic or even to rewrite the book of the well familiar zombie lore we've seen so many times before. Nope,  I prefer to keep it simple and rooted in the mythology established by George A. Romero's original Trilogy of the Dead. What I do need is some decent moments of gut-munching and a compelling human drama unfolding amidst the zombie apocalypse with some in-fighting amongst the survivors - it's a pretty simple formula. The last zombie film that really stuck with me was the Ford Brother's African set gut-muncher The Dead (2010) which was a great entry in the zombie canon that I heartily recommend.  Now let's take a bite out of the latest indie-zombie thriller Dead Season (2011) from director Adam Deyoe (Psycho Sleepover) and see how it stacks up amongst the countless zombie hordes streaming on Netflix and on the shelves at your local Walmart... 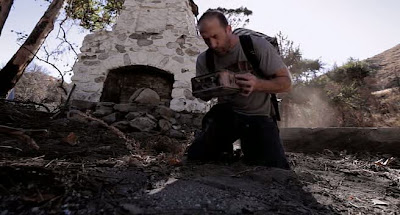 We get a well familiar set-up which succinctly lets us know that a planet-wide viral  outbreak of unknown origin has ignited a plague of flesh-eating zombies upon the Earth decimating the population in just under a year. The creature comforts of modern day are but a thing of the past leaving survivors to scavenge for food and shelter. Elvis (Scott Peat, Transformers) is a former EMT who's wife and daughter were lost in the early days of the plague, he now  survives on a steady diet of scavenged cans of food and booze - slightly drunk really does seem the only way to properly survive the zombie apocalypse. He's a nice guy and it's easy to like him, along the way he aligns himself with another survivor named Tweeter (Marissa Merrill, Photographic). The two flee the mainland for the island of Desoto off the coast of Puerto Rico with the help of a fellow survivor (Danny Hicks, Intruder)  who arranges for a boat. They're hoping for fresh start away from the zombie hordes, however, once they arrive on the island what they discover is quite less than an island paradise. On the island all animal and plant life have been made toxic by years of military ordinance testing and a small group of ex-military men have taken refuge at a former Naval base located on the island. The men are led by the steely-eyed Conrad (James C. Burns, Dinocroc vs Supergator) a man consumed by the well-being of his 17 year-old daughter Rachel (Corsica Wilson, Veer!) after the tragic death of his wife and daughter. To my eyes he seemed a bit like a more redeeming version of "Rhodes" from Romero's Day of the Dead (1985) and while Conrad certainly makes some questionable decisions he's a more likable character than "Rhodes".


Both Elvis and Tweeter are allowed to join the ranks of the military men after proving their worth to the small community. Elvis as a trained EMT proves most useful with his medical skills and it turns out Twitter is a major ass-kicker. Marissa Merrill is a fanboys wet-dream and if there's ever a zombie apocalypse I want her on my team. She's not just a machete-wielding zombie killer but a rather attractive young woman that brings to mind a pleasant mixture of Breakfast Club-era Molly Ringwald with her fiery red hair with a just a splash of Toni Collette - she's very easy on the eye as they says. 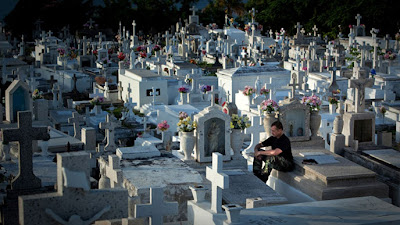 The island scenery is gorgeous and is a great backdrop to the zombie carnage and human drama. The setting brought to mind Lucio Fulci's Zombie (1979) with lush jungle scenery and ocean vistas though not as nearly well-shot but the HD-shot film does look quite good. Add to that some use of existing locations, including a unused set built for Clint Eastwood's Heartbreak Ridge (1986) , and you have a low-budget film with some decent production value, definitely a film that stretches it's dollar for maximum effect.


There's tons of zombie carnage with loads of of flesh-tearing fun over-flowing with intestines, splatter, vehicular obliteration, gunshots to the head, machete whacks and a soda machine that splats a zombie real nice. There's definitely some decently grotesque splatter onscreen for the gore-hounds to enjoy.


The acting from the three main characters is pretty decent throughout and the supporting cast perhaps not so much - Conrad's band of soldiers are pretty weak  but adequate, nothing was ruinous to the overall enjoyment of the film. Scott Peat and James C. Burns are definitely the stand apart performances here with some nice touches of pathos and complexity and each get a few nice character moments. 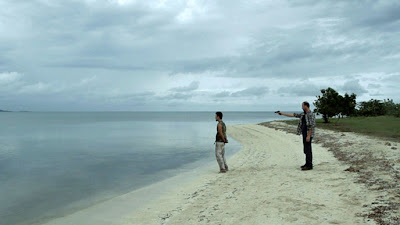 The look of the zombies were pretty uneven in my opinion running the spectrum from pretty great to just sorta lame.  The undead here are of the slow shambling variety but the filmmakers mix-it up a bit with some runners late in the film and while I'm not against fast-moving zombies I didn't feel it was needed here and it felt kind of just tossed into the mix for no real reason.


There's a nice selection of special features including a spirited and informative audio commentary with the filmmakers, a behind-the-scenes making of featurette, trailer, outtakes  and 16 minutes of deleted scenes that include an alternate opening with a bunch of gore fx not seen in the film.


Verdict: Dead Season is an gritty  zombie-chomper with plenty of action and a decent amount of pathos and gore. It gets a medium recommend, it's not gonna blow your mind but it's a fun weekend watch.  2.5 outta 5