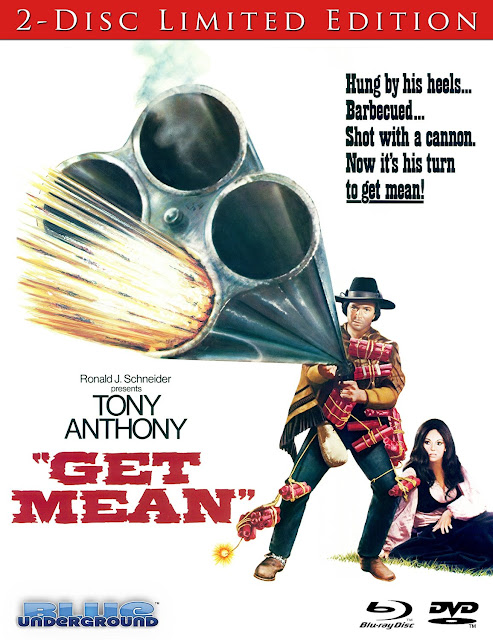 From Italian Spaghetti Western director of note Ferdinando Baldi (Django, Prepare a Coffin) comes one of the damned craziest westerns I have ever watched, starring actor Tony Anthony in the fourth and final entry of The Stranger series of movies. A surreal mash-up of Italian western and sword and sandal fantasy adventure films, which begins with the Stranger (Anthony) in a sort of hopeless scenario, with his hands bound by rope being dragged behind a by a runaway horse through the American desert. Eventually the horse drops dead and the Stranger arrives in a small village only slightly worse for the wear. He finds his way to the local watering hole where a group of villagers offer him a large amount of gold to escort Princess Elizabeth Maria (Diana Lorys) back to her homeland in Spain, where apparently the Spanish old west has been invaded by Viking barbarians and warring Moors, which makes little sense but is never directly addressed by the movie, but it probably has something to do with a pair of mirror balls glimpsed during the opening credits. Now with the Stranger thrown into the mix we have the proper makings for some strange western mash-up fun that doesn't make a lick of sense but never failed to entertain me for ninety-minutes.

By the cover art featuring the Stranger holding a four-barrel shotgun I had expected a gritty badass Western by the looks of things, but this was something different all together! The Stranger as played by Anthony reminded me a bit of Rowdy Roddy Piper from John Carpenter's They Live, a strong and silent type prone to violence and random acts of badassery, peppered with some wry humor, a reluctant hero. The vibe and tone of the movie brought to mind a mash-up of Raimi's Army of Darkness by way Django, with a fun rogues gallery of evil-doers, namely the King of the Moors, a Shakespeare obsessed hunchback named Sombra (Lloyd Battista) and his strongman Diego (Raf Baldassarre) and limp-wristed advisor (Dreyer Anthony), all of whom put our reluctant hero through the proverbial wringer. In service of protecting the princess the Stranger endures being hung upside down by his feet, fired upon by canons, roasted over a spitfire, served on a dinner platter and being slapped around by a ghostly spirit tasked with protecting a treasure! If it all sounds a bit silly and slapstick that's because it is, but the movie is certainly entertaining in a weird genre mash-up sort of way, highlighted by some awesome battle scenes between the warring armies of Moors and the barbarians which are well-staged and nicely shot, this is a fun combination of western and sword and sandal adventure movie, one you won't soon forget.

Audio/Video: Blue Underground have done a fine job of bringing this one to Blu-ray with a new HD transfer and loads of info-laden extras. The PQ is not perfect, image quality fluctuates a bit from time to time, but colors are strong and we have a nice layer of film grain offering some modest fine detail in the close-ups. The English DTS-HD Mono audio sounds great, the banjo-heavy score from Bixio-Frizzi-Tempera suits the oddball movie just right, optional English SDH subtitles are provided.

Blue Underground have stacked this one with new interviews with Producer/Star Tony Anthony, Co-Writer/Star Lloyd Battista, Executive Producer Ronald J. Schneider plus an archival one from Director Ferdinando Baldi. The disc also features a new audio commentary with Battista, and Schneider moderated by David Gregory on top of that, good stuff all around.

On top of the interviews we have eight-minutes of VHS-quality deleted scenes, the French and English trailers and four radio spots, plus a poster and still gallery. We also get an 18 page booklet with writing by Spaghetti Western expert Howard Hughes  who goes in-depth about all four of Tony Anthony's Stranger movies, which I appreciated having not watched any of the previous three entries myself, apparently none of the earlier films were as surreal as this one, very insightful stuff. The 2-disc set is housed in a Criterion-style clear Scanavo case, and includes a DVD of the movie with the same extras as the Blu-ray.

Get Mean (1975) is a strange entry that throws a surreal genre-bending wrench into the standard spaghetti Western fare with some oddball fantasy and adventure elements which might not go down so well with the straight-western fans, but it was a very entertaining entry and those looking for something wildly different and offbeat should give this a watch. Blue Underground have put together an attractive edition of the movie with quality extras, another Italian western rescued from the dusty vaults of obscurity and now on Blu-ray for the world to enjoy. this is a weird and wild one. 3/5