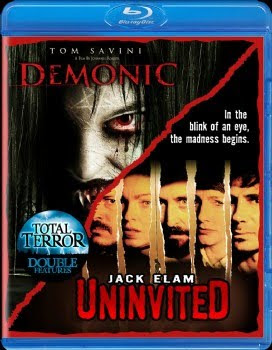 SUMMARY: In England 5 friends are travelling to a countryside lake when they have an accident. They soon discover that the woods are prowled by beautiful nymph-like creatures that seduce then kill their victims.

FILM: A young couple are parked in a wooded area, making out. The woman hears a rustling in the forest, we see quick moving shadows dart through the trees, and the man goes to investigate. Personally, I say "honey, get in the car, we’re leaving", but few horror films are based on good decision making. He’s confronted by a gorgeous naked woman, apparently bewitched by her unearthly charms. they embrace and deeply kiss. It is revealed that the woman’s mouth is toothed with gnarly razor sharp teeth as she tears a chunk of flesh from the young man’s neck. A great start, well done, I was on board immediately. From there we are introduced to five friends on a road trip to a countryside lake. Along the way they get lost, as youngins are apt to do in films such as this. They pull into a darkened gas station to get directions and are accosted by a crazed fella spouting warnings about fallen angels who were banished from heaven for having been infected by an earthly lust and how they now prowl, seduce and kill people in Miranda Forest. A total “It’s got a death curse” moment, right outta FRIDAY THE 13th. No one ever believes the crazy guy, and the group tears outta there quickly and proceed down the road through the forest. After a bit the driver is getting sleepy, he notices something strange in the woods. Momentarily distracted he doesn’t see a woman in the road, violently striking her. The van is damaged beyond drivability, the woman in need of immediate medical attention, and the cell phones don’t work (OF COURSE!). Miles from anywhere, on a desolate road, the group splits into three groups in search of assistance. Once separated the groups each encounter the nymph-like creatures and a mysterious man named Stephen (Tom Savini, GRINDHOUSE, FROM DUSK TILL DAWN, DAWN OF THE DEAD) who is aware of the creatures and has a sinister agenda of his own. A promising start, not a bad idea, but the film is spoiled by shoddy stylistic decisions regarding editing, cinematography and filmscore, and a thin script. A particularly poor choice is the night vision camerawork which pulled me out of the film and the painful electronic score. On the plus side, this film is genuinely eerie at times, there’s an abundance gorgeous naked woman from start to finish and the special effects are well executed for a low budget affair, not gory but pretty bloody. **1/2 (2.5 out of 5 stars)

UNINVITED (1993) “Thrown Only the brave would dare to awaken the guardian of the dead” Directed Michael Derek Bohusz/Starring Jack Elam, Christopher Boyer, Bari Buckner, Jerry Rector, Zane Paolo, Dennis Gibbs/Color/R/90 Min.
SUMMARY: Seven strangers, led by a mysterious stranger, have come together to stake a claim on a gold mine. Once there they discover that there may be more than gold is buried on the mountaintop. 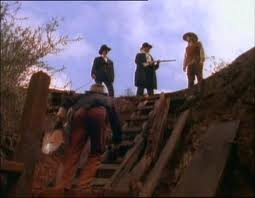 FILM: This is the last film of the legendary Jack Elam (ONCE UPON A TIME IN THE WEST), a man known for his western persona, he  gets top billing, and he's in the film for maybe 3 minutes. UNINVITED is that most rare of horror sub-genres the western-horror, most recently visited by THE BURROWERS. This is the tale of several disparate folks who've pooled their money and to lay claim to a goldmine, intending to split the profits. A good cast of characters; the hooker with a heart of gold, the couple looking for a down payment on a homestead, a priest with a past, and a cagey survivor of the Donner Party.  Along the way they disturb an ancient native American burial site, and that's never a good idea. Afterwards, violence and tension erupts between the group as one by one they die off at the hands of angered spirits and each other.  I feel the filmmaker overstepped the films meager budget trying to capture the look and feel of a gold rush-era western here and it hurts the film and it feels thin in parts, but the film is steeped in mountain mist and a sense of doom for all involved. It works to a point, but the film is too slow moving.
RATING ** (2 out of 5 stars)

DVD: This DVD is the 1st of two entries into the blu-ray market for Mill Creek Entertainment. A company primarily known for releasing budget collections of public domain films and television series. There are no special features included for either film. The films are presented in anamorphic widescreen. The image quality is good, purportedly 1080p high definition, but visually appears little better that standard definition, which is appropriate. Mill Creek’s DVD’s have VHS quality images, it is logical that their blu-ray editions would have DVD quality images.
VERDICT: Both these film are also available on Mill Creek Entertainment’s BLOOD BATH 12 Movie Collection DVD set, which is worth a purchase if only for the Fiona Horsey films alone, but there's some other good stuff on there, too. These films were fun, but for the budget minded, I can't see committing to blu-ray when the standard-def version look just as good. OVERALL RATING **1/2  (2.5 out of 5 stars)