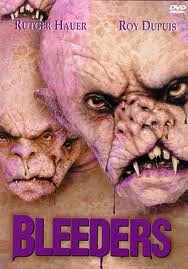 SUMMARY: John, a young man with a mysterious blood disease travels to an island off the coast of Maine to seek relatives in hope of finding a cure to his illness. Once there he discovers that his relatives have died ...or have they? Somethings living in the catacombs  beneath the island, something living on the flesh of the deceased. What does this have to do with John's blood disease, mysterious cravings and his ancestors incestuous past?
THE FILM: What drew me to this movie was the writing credit from Dan O'Bannon and Ron Shesett - the writing team that brought us ALIEN (1979), DEAD & BURIED (1981) and TOTAL RECALL (1990). I've read that the film is loosely based on the H.P. Lovecraft short story "The Lurking Fear", yet more Lovecraft I need to read. Add to the O'Bannon factor that Rutger Hauer (BLADERUNNER, THE HITCHER, LADYHAWKE) received top-billing and I couldn't resist taking in a viewing. Hauer's been in my mind a lot as of late after checking out the teaser trailer for HOBO WITH A SHOTGUN which looks stupefyingly amazing. During the prologue of BLEEDERS we are introduced to the Eva Van Daam, a woman of the 16th century so gorgeous and narcissistic that she deemed no lover good enough for her except her own twin brother. It's pretty funny, as we are shown the two making love we seen the man's broad shoulders and masculine physique, the close-up of her face is obviously the woman with a goatee, nice. When the King of Holland outlaws incest in 1692 the Van Daam's pull up roots and re-settle on an island of the coast of Maine where they can just keep that incest going full-on until they've inbred themselves into unsightly gargoyles. Three hundred years later John Straus and his wife travel to said island in hopes of finding clues to his rare and debilitating blood disease.

John arrives on the island in ill-health and is taken to Dr. Marlow, the islands doctor with a reputation as a bit of a drunk, played by the venerable Rutger Hauer. Oddly, Hauer receives top-billing in the film, but then again when the bland Roy Dupuis is the alternative...  Dr. Marlowe takes an interest in John's strange affliction and takes a blood sample to run tests.


"Wow. Looks like I'm making some guests for the hotel ...and with any luck, a burial plot too" - Byrde Gordon / Bleeders 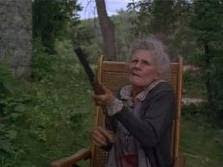 It turns out there are no Strauss's on the island and Dr. Peterson whom delivered John has since passed on. However, his crotchety nurse Lexie Crungle (Jackie Burroughs) is alive and rollin' around in a wheelchair, packin' a shotgun and conveniently resides at the Van Daam mansion that burned down 75 years earlier, killing off the last of the Van Daam clan. I love mean elderly people in films and Mrs. Crungle is a great one. She's a mean ol' bitch and serves only to unload a ton of expository dialogue here, but I loved her scenes just the same, great stuff. It's too bad she doesn't hang around long. 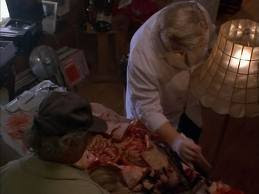 About the same time a mutilated corpse in brought into Dr. Marlowe's office. It fell into the harbor and was torn apart by the blades of an outboard motor. Upon examining the mangled mess of flesh Dr. Marlowe discovers that it's deformed, hermaphroditic, and strangely shares the same blood disease as John. A short while later a child is dragged underground by a hideous creature while playing hide n' seek at the cemetery. Several townsfolk and Dr. Marlowe head underground and discover the previously undiscovered catacombs and the cannibalistic, inbred inhabitants therein. 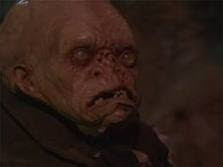 The creature effects are top notch considering the limited budget of the film. They're appropriately grotesque,  misshapen goblins with bulbous deformities and extraneous eyes, nnostrils and primitive tools used in the capture of prey. Hauer is really good, if subdued, but Roy Dupruis is quite terrible as the lead. What really enhanced the film for me was the setting. Filmed in Vacouver B.C. the island location is gorgeous and showcases the island's scenic natural beauty. The story is written by Dan O'Bannon so you know it's a well-crafted story.  O'Bannon also scripted another stellar seaside village script, the highly recommended DEAD & BURIED (1981). And for the hormone driven segment of my readership I am pleased to say both Kristin Lehman and Gillian Ferrabee are filmed in their naked splendor, not hard on the eyes at all.  The downside, Peter Svatek's direction is lackluster and the cinematography is  bland and has the look of a made-for-tv film, some of which I could put on the pan & scan transfer. There's also a plot device involving substandard wood used in the construction of coffins that was might laughable though key to the film, oddly enough. The tension in flaccid throughout and I couldn't help but wonder what this film could have been in the hands of a more skilled and nuanced director.

DVD: Bleeders was released on DVD by Fries Home Entrainment. It's a 1.33:1 pan & scan presentation with 2.0 stereo soundtrack. No special features are included. The image and sound quality are very decent, nothing special, not overly crisp or clear, but sufficient.

VERDICT: This is a truly underrated creature feature despite the flat direction. I've heard mention of it here and there and usually in a mediocre light. A great story concept done an grave injustice by the uninspired direction and mediocre acting talents that is saved in part by the presence of Rutger Hauer and great creature effects.  *** (3 out of 5 stars)