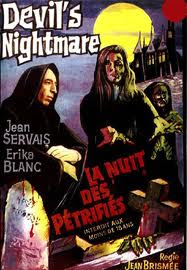 SUMMARY: When a group of tourists gets stranded in the Italian countryside, a stranger offers them shelter for the night in his castle. But his family is cursed: The eldest daughter in each generation is destined to become a handmaiden of Satan. The horror begins when the current eldest daughter (Erika Blanc) turns up and begins exploiting the guests' weaknesses to make them damn themselves. 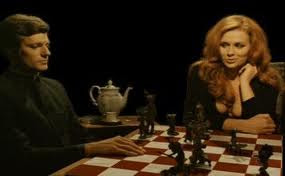 THE DEVIL'S NIGHTMARE begins in Nazi Germany 1945 as the wife of a Nazi is giving birth to a daughter, the woman loses her life during childbirth. The father takes the child's life by plunging a dagger into it's body. Two decades later a group of tourists are the stranded in the Italian countryside when former Nazi Baron Von Rhomeburg offers them lodging in his gothic castle. As Hans the butler shows each of the guests to their rooms he goes into great detail how people have died in the very same rooms over the centuries, it's very creepy and a nice touch. That very day a reporter doing a story on the castle dies mysteriously after being chased by an unseen pursuer. The groundsmen surmise she's died of fright, and she bears the mark of the Devil. As the guests are gathered for dinner the Baron reveals that the eldest daughter in each generation of his bloodline is destined to become the handmaiden of Satan, a Succubus. During dinner an 8th gues arrivest, the mysterious red-haired beauty Lisa (Erika Blanc, KILL, BABY...KILL!). The guests are comprised of a priest, Father Alvin, two bombshell lesbians, a troubled couple, a seductress (Ivanna Novak, SEVEN BLOODSTAINED ORCHIDS), elderly chap Mr. Foster and a gluttonous man with an unhealthy appetite. Similarly to the film SE7EN the guest are representations of the 7 deadly sins and are damned for their sins as Lisa exploits their weaknesses. We get several varied and fun deaths throughout the film;  guillotine, iron maiden, snake bite, suffocation, impalement, poisoning ...none of it's overly gory but it's effective stuff. Particularly effective is Lisa is transformations from fire-crotch beauty to a ghoulish demon with mottled gray flesh. 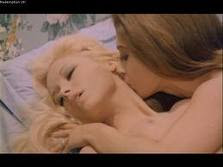 We also get some of that infamous Euro-horror nudity. Some of these euro films of the 70's were pretty schlocky but there never seemed to be a shortage of gorgeous European beauties willing to flaunt their natural gifts on film. There's also no shortage of b-movie shtick: dripping blood, doors opening and closing on their own, books falling off shelves, a laboratory. Good stuff. 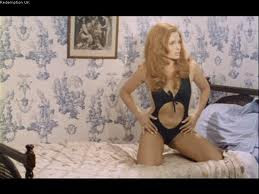 After the other guests have met their fates at the hand of Lisa Father Alvin is the sole-survivor having resisted the temptations of Lisa's sexual advances. When she finally exposes her true self to him he is horrified and slashes at her face with his crucifix leading to a hilarious and protracted string of facial contortions that goes on for far too long. The priest runs from the castle and is greeted by a dark stranger having just arrived in horse drawn carriage, it's Old Scratch himself played by none other than Daniel Emilfork - Krank from one of my most treasured films THE CITY OF THE LOST CHILDREN (1995) - just brilliant! Father Alvin offers his soul in exchange for the lives and souls of his seven companions. Satan agrees, and the priest signs a contract in his own blood, dipping a quill into his opened vein to do so. The contract immediately burst into flames.

Is Satan willing to spare their souls? Is any deal with the Devil ever so cut and dried?
﻿

DVD: This film is part of Mill Creek Entertainment's PURE TERROR 12-Disc Set of 50 films. The film and sound elements probably aren't from optimal sources but the presentation looks quite good. The film is presented in 1.85:1 non-anamorphic widescreen aspect ratio with mono audio. No special features. I'll have a full review of the entire boxset forthcoming, but I enjoyed the film quite a bit and wanted to throw up a quick stand-alone review for the blog. The set also includes a few notable inclusions, THE HOUSE THAT SCREAMED (1969), HANDS OF STEEL (1986), Lucio Fulci's absurd HOUSE BY THE CEMETERY (1981) and a film in particular I've long heard tell of but never seen MANOS: THE HANDS OF FATE (1966). I can't wait to dig in!
VERDICT: I really enjoyed this film. Great story, gorgeous scenery, beautiful women. These 1970's Euro-Horror films are all over the place in regards to quality, but this one is a winner. Definitely worth a look if you love b-movie schlock, obscure classics and especially Euro-Horror as this set is chock full of it.  RATING: *** (3 Out of 5 Stars)
- McBASTARD