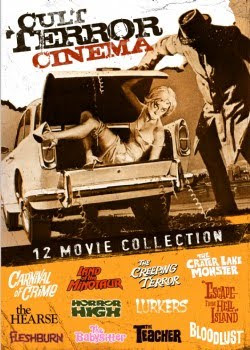 I do enjoy a Mill Creek Entertainment budget collection, I must say. They're a company known for bringing cult, horror and public domain schlock to the dirty, unwashed masses, and this set here is probably one their top five collections in my humble estimation. Do yourself a favor and also check out the following collections: CHILLING CLASSICS 50pk, PURE EVIL 50pk and the GOREHOUSE GREATS 12pk. American International Pictures (AIP), a company primarily known for low budget grindhouse cinema, biker, exploitation, and b-movie drive-in fare has recently been acquired by the fine folks at Mill Creek and the CULT TERROR CINEMA set is comprised of 12 AIP titles, a few of which are DVD debuts; while several others are out of print. So, lets dig in...

THE HEARSE (1980) "There is a door between life and death and now, that door is open!"Directed by Charles B. Pierce/Starring Trish Van Devere, Joseph Cotton/Color/PG. Recent divorcee Jane Hardy (Trish Van Devere, THE CHANGLING) decides to move into her departed aunt’s home; her aunt was a practitioner of the black arts, a witch. Jane finds herself menaced by a mysterious black hearse and its driver. and is almost run-off the road by as she arrives in town. The film contains elements of the THE AMITYVILLE HORROR, THE CHANGELING, and BURNT OFFERINGS, and they came together quite well. I really enjoyed this film, TrishVan Devere is great and Joseph Cotton (LADY FRANKENSTEIN) appears as a  a drunken attorney. The ending is a bit confusing, but I recommend a watch this haunting tale of possession and witchery. RATING ***1/2 (3.5out of 5 stars) 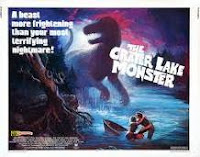 THE CRATER LAKE MONSTER (1977) "A beast more frightening than your most terrifying nightmare!" Directed by William R. Stromberg/Starring Richard Cardella, Glenn Roberts, Mark Siegel/Color/Unrated. A group of archaeologists, including a pipe smoking professor (of course) discover cave paintings that prominently features a plesiosaurus-type creature, however, before the discovery can be documented a meteor slams into Crater Lake (ironic, no?) destroying this amazing discovery. Shortly thereafter the backwoods community of Crater Lake, Oregon experiences as rash of mysterious deaths. A long buried plesiosaurus egg, buried in the mud of the lake, has been incubated by the searing heat of the submerged meteor, and full grown dinosaur emerges – pure genius. The creature, obviously inspired by the classic Loch Ness creature, is pure schlocky awesomeness, done in true Ray Harryhausen stop motion style. For a schlocky 70’s B-movie the setting is great, making full use of the wooded area and scenic lake beauty, mist rolling off the water, scenic vistas, captivating stuff. Arnie (Glen Robert) and Mitch (Mark Siegel) the comic relief of the film steal the show, providing slapstick laughs and even a bit of emotional gravitas. A forgotten drive-in classic, if you love 70’s schlock and creature features you are sure to love THE CRATER LAKE MONSTER.
RATING ***1/2 (3.5 out of 5 stars)

HORROR HIGH (1974) "The man who survived "Precinct 13? is back!" Directed by Larry N. Stouffer/Starring Pat Cardi, Rosie Holotik, Austin Stoker/Color/PG. High school nerd Vernon Potts (Pat Cardi, BATTLE FOR THE PLANET OF THE APES) is bullied to no end in this film; the school bully, the gym coach, the creepy custodian, even the elderly English teacher Ms. Grindstaff – geesh, what a loser, right?. The only person not shitting on him for some reason is the hot redhead, Robin, whom he has a major crush on. Vernon is performing an experiment on Mr. Mumps, a guinea pig, aimed on transforming the rodent in some way, and does it ever. The guinea pig is transformed into a ravenous beast that kills the janitor’s beloved cat that for some reason he takes with him to work, odd. In a crazed burst of violence the janitor beats the bejeezus outta Vernon, kills the guinea pig, and forces Vern to drink his own chemical concoction, wrong move. The elixir transforms skinny ol' Vern into a violent, super strong nerd bent on revenge ala Jekyll & Hyde. You never really see a clear shot of Vern once he's been transformed, I think it works for this low-budget revenge thriller. As the tagline would indicate, actor Austin Stoker (Ethan Bishop from John Carpenter's ASSAULT ON PRECINCT 13) portrays Lt. Bozeman, the man in charge of investigating the string of murders. A really striking revenge thriller, good stuff.
RATING ***1/2 (3.5 out of 5 stars) 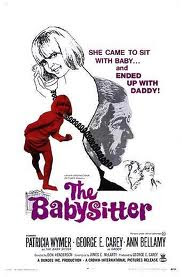 THE BABYSITTER(1969) "She came to sit the baby... and ended up with Daddy!" Directed by Don Henderson/Starring Patricia Wymer, George E. Carey, Ann Bellamy/B&W/R. Deputy District Attorney, George Maxwell (George E. Carey) is in the middle of a case involving the prosecution of a murderous motorcycle gang member but has a hard time juggling the case with his complicated family life when he begins a tryst with the much younger girl, the titular babysitter, Candy (the super gorgeous Patricia Wymer). The girlfriend of the biker discovers the affair and blackmails George. What a bizarre film, a male fantasy mingled with a biker thriller of sorts, a lot of fun.
RATING *** (3 out of 5 stars)

BLOODLUST! (1959) "Maniac Hunts Humans in a Jungle Hell!" Directed by Ralp Brooke / Starring Robert Reed, Wilton Graff, June Kenney/B&W/Unrated.
Two young couples set sail for a three hour tour, and much like GILLIGAN’S ISLAND, they end up on an apparently deserted island, however, this island is not home to Ginger or Mary-Anne, the island is owned by Dr. Balleau, an eccentric nut with a passion for hunting humans. The teenagers, led by Johnny (Robert Reed, BRADY BUNCH) must escape Dr. Balleau (a great over-the-top performance from Wilton Graff) if they hope to make it off the island alive. RATING ** (2 out of 5 stars) 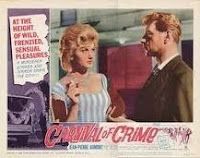 CARNIVAL OF CRIME (1962) "At the height of wild, frenzied, sensual pleasures... a murderer strikes and terror grips the city!" Directed by George Cahan/Starring Jean-Pierre Aumont, Alix Talton, Tonia Carrero/B&W/Unrated. A architect is attempting to complete his new building project at the expense of his relationship with his wife. After his unfaithful wife mysteriously turns up missing, the police suspect he is responsible for her disappearance. The architect must discover what happened to his wife to clear his name. RATING ** (2 out of 5 stars) 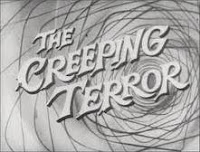 THE CREEPING TERROR (1964) Directed by Vic Savage/Starring Vic Savage, Shannon O'Neal, William Thourlby/B&W/Unrated. A spacecraft lands in a remote area outside of a small California town and a ridiculous looking, shambling alien creature emerges and promptly begins eating people. The Creeping Terror is widely considered to me one of the worst films of all time, giving PLAN 9 FROM OUTER SPACE and MANOS HAND OF FATE a run for their proverbial cash. Fun fact: there’s a rumor that a more impressive looking monster was designed for the film only to be stolen mere days before shooting was to begin, thus resulting in the now infamous “pile of carpets” monster. If you love schlock, this is a must-see.
RATING **(2 out of 5 stars)

ESCAPE FROM HELL’S ISLAND (1963) Directed by Mark Stevens/Starring Mark Stevens, Jack Donner, Linda Scott/B&W/ Unrated. A Florida boat captain loses his license after an attempt to smuggle some Cuban refugees results in a woman dying in the process. When he takes up with the wife of a jealous man, it puts him in great danger when the man charters the captain's boat with the intent to kill him while on the voyage. RATING **1/2 (2.5 out of 5 stars)

FLESHBURN (1984) "A new kind of revenge!" Directed by George Gage/Starring Steve Kanaly, Sonny Landham, Karen Carlson/Color/R. Calvin, a Native American Vietnam veteran (bad-ass Sonny Landham, Billy from PREDATOR) escapes a mental institution where he was sent by four psychiatrists, who testified during his trial, having been brought up on charges after he deserted his squad based on spiritual beliefs, resulting in their deaths. After his escape he seeks revenge upon the psychiatrists, whom he stalks and kidnaps, leaving them in the scorching desert to die. The film is advertised as sort of a Native American RAMBO or DEATHWISH-type exploitation flick, and while it isn’t exactly that it is interesting watch. RATING *** (3 out of 5 stars)

LAND OF THE MINOTAUR (1976) "Half man... half beast...trapped in a world forgotten by time!" Directed by Kostas Karagiannis/Starring Donald Pleasance, Peter Cushing, Costas Skouras/Color/PG. In this occult thriller a group of youths disappear while searching a hidden temple dedicated to the Minotaur near a small Greek village. A Catholic priest (Donald Pleasance, HALLOWEEN), a New York police detective, and the girlfriend of one of the missing persons team-up to search for the missing youths and uncover a pagan cult devoted to sacrificing victims to the Minotaur, led by Baron Gordon (Peter Cushing, HORROR OF DRACULA). The pagan statue of the Minotaur in this film is awesome, it’s anatomically correct and shoots flame from its nostrils, very menacing, but overplayed. Pleasance plays the Catholic priest version of his Dr. Loomis character from Halloween, and Cushing is more or less wasted in a thankless role, that of the least menacing villain in recent memory, the elderly cult leader. Unless you’re a Pleasance/Cushing completist it’s hard to recommend a sit through on this one. RATING ** (2 out of 5 stars)

LURKERS (1988) "Cathy's not scared. She should be... she's one of them!" Directed by Roberta Findlay/Starring Christine Moore, Gary Warner, Marina Taylor/Color/R. Cathy is a young woman whom endured a truly nightmarish childhood and is haunted by visions of the dead, including her murderous mother. She sees "lurkers", damned souls warning her of danger, telling her not to go back to her childhood home. The film has a bit of a low-rent THE BEYOND or THE SENTINEL feel to it, but it's a bit too meandering and overly long to keep my attention. Director Roberta Findlay, and husband Michael Findlay were pretty famous for a series of grindhouse-style sexploitation films, after her husbands death in ’77 she went on to direct hardcore pornos and again returned to the horror genre in the mid-80’s. Interestingly, Michael Findlay was killed in a helicopter accident on the roof of the Pan Am Building in NYC, slashed to death by the helicopters spinning rotor-blades during a botched landing.  RATING **1/2 (2.5 out of 5 stars)

THE TEACHER "After school... her lessons began with sex and ended in violence" (1974) Directed by Howard Avedis/Starring Jay North, Angel Tompkins, Anthony James/Color/R. Sean (Jay North, DENNIS THE  MENACE) is a recent high school graduate and takes up a sexual relationship with Diane (Angel Tompkins) his married teacher. A psychotic neighbor (Anthony James, UNFORGIVEN) is obsessed with the woman and is out to get Sean. The entire films kinda feels like a fleshed out softcore porn, I ain't complaining, just saying. Who hasn't fantasized about a teacher, and rarely are they as hot as Angel Tompkins, yowza. A crazy, fun exploitation flick that hits a few dark notes along the way.
RATING ***1/2 (3.5 out of 5 stars)

DVD: Not known for generous supplemental materials Mill Creek has made no exception  here, no special features. The 12 films are presented on 3 dual-sided flipper discs in black paper sleeves housed within the DVD case. I'm sure little money was invested into film restoration here, so I think we’re just lucky that these films are as presentable as they are, most of the films are 16x9 enhanced widescreen presentations, which is awesome. You get the usual array of ghosting, missing frames, digital artifacting, scratches, pops, cigarette burns, pretty standard stuff for theses budget collections, but only minor issues considering the grindhouse/drive-in origins of the films.

VERDICT: Mill Creek Entertainment has done it again, I had a ton o’ fun sifting through the cult, schlock, exploitation and B-movie’s films contained herein. For me the highlights were the gems THE HEARSE, HORROR HIGH, THE CRATER LAKE MONSTER, THE BABYSITTER, FLESHBURN, and THE TEACHER – worth the $10 price tag by themselves. One of the top 5 Mill Creek collections, great stuff, and a good consistent collection of obscure cult, schlock, and horror cinema. OVERALL RATING **** (4 out of 5 stars)