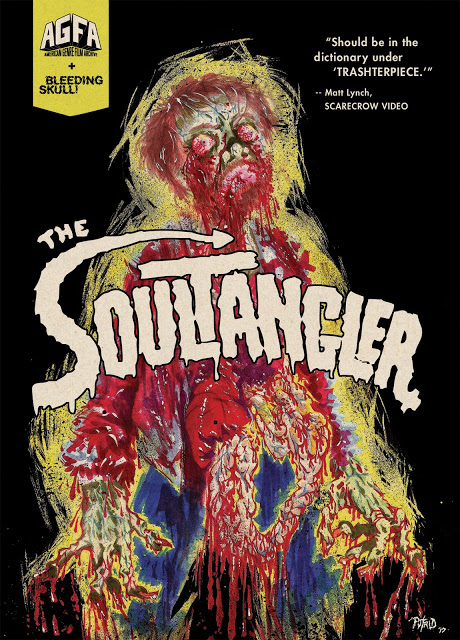 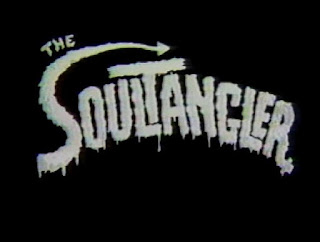 Synopsis: If Re-Animator was shot on Long Island for the price of a used car, The Soultangler would be the result. Insane genius Dr. Anton Lupesky has developed a drug that allows users to inhabit corpses and transform into rabid maniacs! Can reporter Kim Castle stop the carnage and save our species from annihilation?! This epic of outsider filmmaking is a dream-like wasteland that’s punctuated with severed heads, evil beasties, and hooded slashers. Filmed in basements and garages, director Pat Bishow’s earnest devotion to storytelling in the spirit of H.P. Lovecraft elevates The Soultangler beyond kitsch and into heavenly territory. 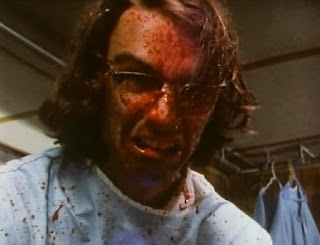 Shot on the cheap in Long Island back in 1985 this lo-fi Re-Animator (1985) riff from backyard movie maker Pat Bishow is the mind-bending tale of Dr. Anton Lupesky (Pierre Devaux), a greasy sort of Herbert West character who like the Lovecraftian mad doc has also created a nightmarish green-serum, not a re-animating agent, but a drug he calls "anphorium" that allows him to project his soul into the bodies of corpses (as long as they have eyes), but it also afflicts the user with horrific hallucinations and sends them careening into a void of insanity. 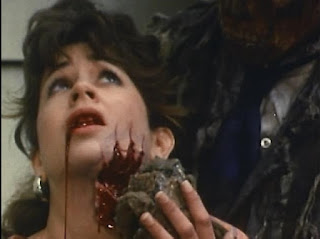 At the start of the film Lupesky has been expelled from legitimate medical practice at the Whitewood Institute by Dr. Janet Simpson (Ginny Dunlevy) who objected to the docs unorthodox experiments on the insane, an expulsion and professional disgrace which sent him to Germany in search of more medical freedoms abroad, but after a year he returns to the U.S. after finding that Germany's medical facilities were not up to his high standards. After returning to Long Island he settles into a makeshift basement laboratory, and with the help of adoring assistant Jessica (Louise Millmann) and hammer-wielding henchmen Carl (Bob Cederberg) the doc begins his mind-altering experiments anew, with Bob cruising the streets in a van and procuring a supply of fresh souls/corpses for the doc to experiment on. The scenes of Bob in a hooded mask chasing down and hammering his chosen victims is an inept sort of low-budget spectacle, hammering folks in their front yards and stalking a woman in a basement, ripping off his mask and stiffly (maniacally?) laughing. 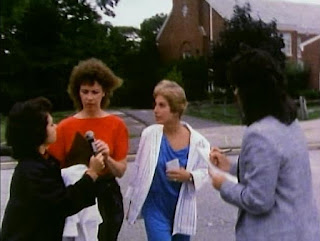 Lupesky's return to Long Island draws skepticism from Dr. Janet Simpson who unwisely decides to confront the doc face-to-face, and then there's a local reporter named Kim Castle (Jamie Kinser) who is obsessed with the doc, looking for a connection between him and her late religious father who warned against the maniacal madman. Castle becomes entangled in the story, also managing to rope-in her boyfriend Zack (Tom Ciorciari) and her concerned roommate Sandra (Susan Chase). 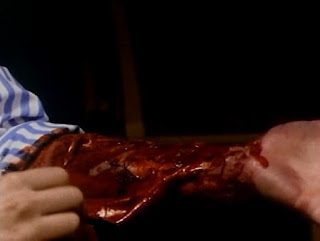 This cheap splatter film is poorly made but the director's love of horror bleeds through with a trippy homegrown aesthetic that I can get behind, the low-budget gore is actually quite astounding once it gets going, but the film starts of deathly slow with a lot of boring filler-scenes. Apparently the director was contracted by the distributor to turn in a ninety-minute version of the movie, and it's padded with numerous scenes of people walking and/or driving around and close-ups of eyeballs!  However, once we get to the final third it ramps up nicely with scene after scene of exquisitely cheap practical effects. We get all sort of gooey stuff, decapitations, gouged eyes, cadavers in various states of dissection, nightmare zombie dreams, and a doll stuffed guts, all sorts of nasty fun to be had, including a memorable scene of a soul-tangled corpse with a wildly flicking tongue strangling someone with it's own bloody intestines, and a scenes of a disembodied brain that looks like Gary the snail from Spongebob Squarepants with two eyes attached via optic nerves! It's all very cheaply done but I have to give it up to the folks who made it for going all-out with the imaginative gore in the final stretch, it was breathtaking in in a lo-fi sort of way. 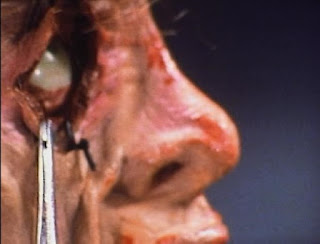 Now the acting throughout is bad, real bad, the cast is made-up of friends and relatives of the director doing their best but somehow still coming up short in the traditional sense. Pierre Devaux as the mad doc turns in the best of the bunch, and by best I mean absolutely unhinged, he goes for it with a lot of heart and overshoots it by a mile with an enthusiastic bit of scene-chewing fun, he's out of his mind high on his own mind-bending drug, it's endlessly entertaining. The Soultangler (1987) is a trippy bit of homegrown horror cinema, the line "Re-Animator was shot on Long Island for the price of a used car" from the synopsis really captures the essence of the film, if you're the sort of demented horror fan who craves micro-budget gore and cheap backyard production values you could do a lot worse than The Soultangler, a film that wears it's heart on it's sleeve and is dripping with cheap atmosphere and plenty of blood-colored Karo syrup. 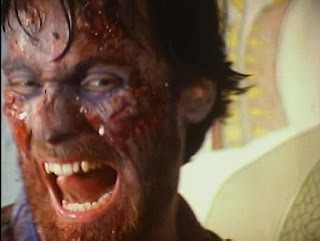 Audio/Video: The Soultangler arrives on DVD from AGFA/Bleeding Skull, having previously been issued as a limited edition VHS release from Bleeding Skull/Mondo a few years back. The gory lo-fi nightmare was originally shot on 16mm film but transferred to and then edited on 1" videotape, as the original 16mm elements are no longer in existence the film was transferred from the original 1" master tapes for this release. It has a bit of that lo-fi shot-on-video sheen, but considering the source the colors look fairly good and the details are relatively, well, not crisp, but decent enough you know? The image looks a bit soft and the darker scenes can be a bit murky murky but this is pretty impressive looking all things considered, it certainly looks better than the average SOV oddity, but you still get some video scan lines showing up from time to time.

Audio comes by way of an English Dolby Digital mono, it's on par with the visuals and maybe a bit worse with poorly recorded natural audio, strangely overpowering overdubbing, and startling loud music cues in place of where some dialogue should be. There's also a wonderfully cheesy 80's synth score, there are no subtitles are included on this release. 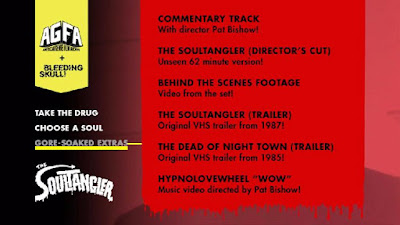 Onto the extras we get an audio commentary from director Bishop who is very forthcoming about the quality of the film, it's equal parts praise and a realistic awareness of how bad it is, it's a good listen detailing what it was like making this splatterific cheapie with friends and family in Long Island in '85.

Also included is a shorter 62-minute director's cut of the film which trims a lot of the slower parts - which were only added at the insistence of the distributor who demanded a longer cut, but for the record I prefer the longer cut as it has a strange otherworldly quality about it, it's hypnotic in a stoner watching a bad horror movie sort of way. 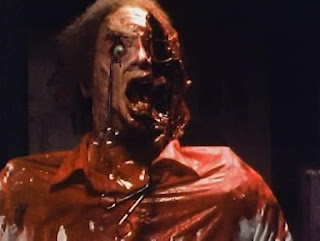 The disc also include 12-min of behind-the-scenes footage shot on a camcorder during filming, it's fun peak behind the curtain of the film, it made me wish me and my like-minded friends would have made a movie back in the 80's.  There are also trailers for The Soultangler and Bishow's previous film Dead of Night Town, a music video for Long Island rockers Hypnolovewheel's "Wow" directed by Bishow, plus a 12-page Blu-ray sized booklet with liner notes/conversation with Bishow penned by Bleeding Skull's Zack Carlson. The single-disc release comes housed in a clear DVD case with a sleeve of reversible artwork, the a-side featuring a gore-a-dellic illustration from Matt “Putrid” Carr, the b-side looking like a VHS-style image, it very well could have been the original artwork for the movie, not sure but I prefer the a-side 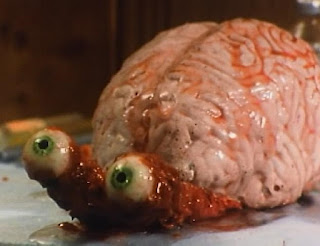 Fans of homegrown horror and lo-fi gore need The Soultangler (1987) in their lives, while it's not a shot-on-video film it certainly fits right in with the strange 80's backyard productions you'd associate with SOV, plus we gets loads of gooey and gross special effects which are totally fun. You can tell the director was in love with the film Re-Animator, it doesn't rip it off but he's definitely riffing on the whole madman with a strange serum idea, and I had a blast with it, but at the same time I could see more mainstream horror fans thinking this was one of the worst movies they've ever seen, they're not wrong, they're just not demented enough to love it the way I do. 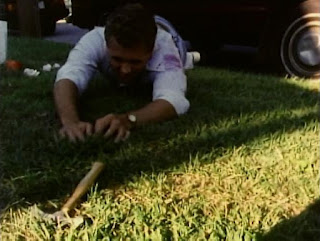 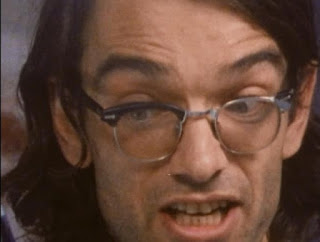 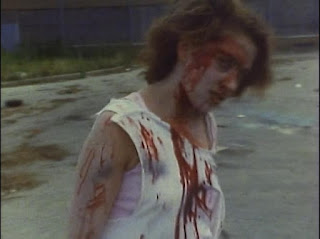 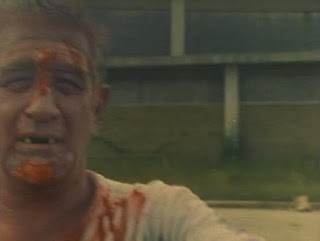 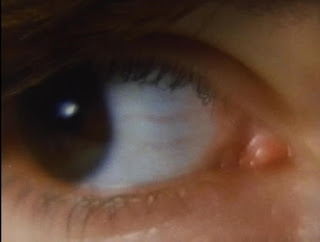 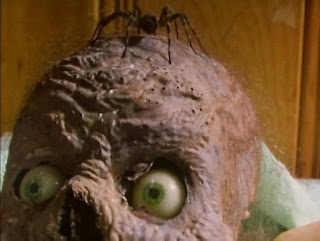 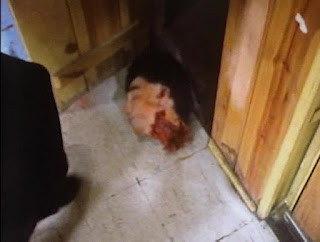 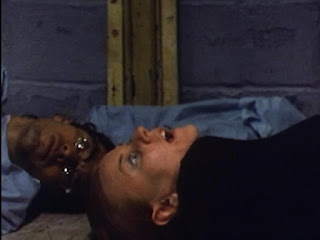 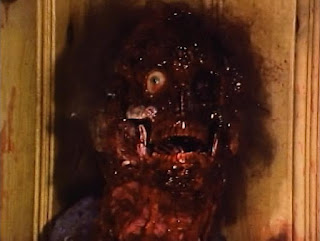 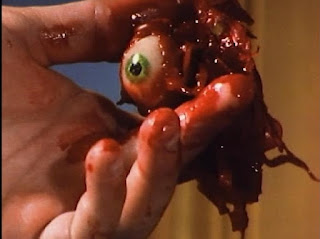 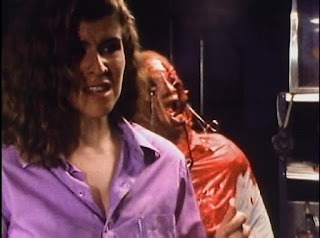 SCREENSHOTS IN THIS REVIEW WERE


SOURCED BY ME FROM THE AGFA DVD