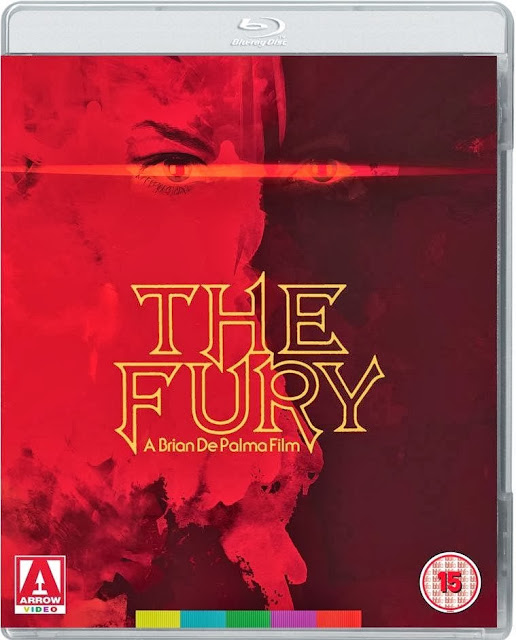 Synopsis: John Cassavetes gives his most sinister performance since Rosemary’s Baby as a man who kidnaps the telepathic son of his colleague (Kirk Douglas), aiming to turn him and similarly gifted individuals into human weapons. Meanwhile, Gillian (Amy Irving), is worried enough about the destructive potential of her own powers to agree to be institutionalized - but is the Paragon Institute all that it’s cracked up to be? 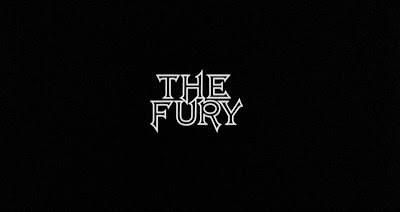 Following the success of supernatural prom-scare Carrie (1973) Brian De Palma continued his exploration of the supernatural with the spy-supernatural thriller mash-up The Fury (1978), it's definitely a weird ride that begins with Robin Sandza (Andrew Stevens, The Terror Within) having a conversation about the direction of his life on a Middle Eastern resort beach with his CIA agent father Peter, played by Kirk Douglas (Paths of Glory) when terrorist storm the beach in a hail of machine gunfire. The target of the attack is Peter, Kirk Douglass even at 62 years of age was looking pretty damn fit while rocking a pair of short shorts while taking out terrorists with an AK-47. It's a thrilling start to the film, action-packed and loaded with De Palma's signature moving camera, we're off to a great start.

During the attack Peter's son is protected from harm by Sandza's CIA friend Childress (John Cassavetes, Rosemary's Baby) who it turns out is not such a great friend after all, he set-up the attack in order to remove Peter and recruit Robin for a CIA-funded telekinetic murder squad. Believing his father dead Robin turns cold and disillusioned by the tragic event. Childress along with the help of seductive mentor, Dr. Susan Charles (Fiona Lewis), dope-up and brain-wash their new psychic assassin, but the process further unhinges Robin who becomes an increasingly powerful and soulless weapon.


Meanwhile, Peter who actually survived the attack is searching for his son while evading clandestine CIA agents, this plot thread leads to some weird, humorous scenarios with Peter dropping in through the window of an apartment building and holding a family a gunpoint while he disguises himself with shoe polish and a fresh set of clothes. When the CIA track his whereabouts he escapes the apartment in an age defying Bourne Identity-esque series of gymnastic escapades,  then he hijacks two off-duty police officers, one of whom is played by De Palma regular Dennis Franz (Blow Out) as Peter leads them on a wild ride through a fog drenched construction site. 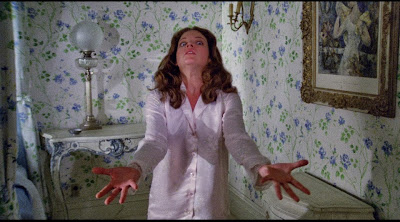 Eventually Sandza tracks his son down to the Paragon Institute with the help of his girlfriend Hester (Carrie Snodgrass, Pale Rider) and the sweet, young psychic recruit Gillian (Amy Irving, Carrie). The psychic warfare prep-college is being run by Dr. Mckeever (Charles Durning, Dark Night of the Scarecrow) who always delivers a great villain when onscreen, good stuff. However, when Peter attempts to spring his psychotic son from the institute the results are expectantly tragic and psycho-kinetically explosive.


The film is a bit of a clunky mash-up, t times the spy-thriller and supernatural elements don't exactly mesh perfectly, when the two meet head-on during the finale it's fun stuff if a bit odd. The Fury is an interesting watch with some great moments, during the finale when Robin's eyes are burning iridescent blue and the psychokinetic mayhem is full-tilt it's fun stuff. Douglas is entertaining as the betrayed agent in pursuit of his son, and Cassavetes as the cold, calculating villain is fantastic, his presences is just something you can't take your eyes off. As ever Amy Irving is delightful as the naive and sympathetic telepath Gillian, a young woman recruited by the Paragon Institute, she really pulls you in, which is great because Andrew Stevens doesn't exactly make you feel anything for his character, turning in the most non-effectual performance of the film.  At nearly two hours the film struggles a bit to keep a decent pace despite De Palma's enjoyable visuals, the interesting bits just don't add up to form a cohesive story.


I think the film's biggest flaw is the script, it's incoherent at times, but De Palma's tense directing style and some strong performances keeps the weirdness flowing along while keeping head scratching to a minimum, it keeps you off balance just enough to go with it. If you think too much about what you're seeing here O think it would be detrimental to your viewing, trust me. 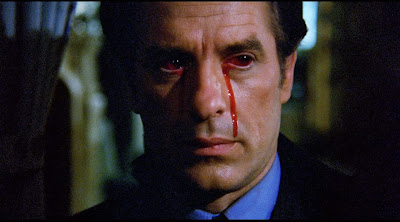 There are some nice effects and gore peppered throughout, including a great Scanners-esque finale, the film shares quite a bit with Cronenberg's classic, but falls a bit short on it's promise. We get the usual array of De Palma cinema magic, a great scene of Gillian escaping from the Paragon Institute plays out in beautiful slow-motion, nearly silent, the escape is successful but not without collateral damage, a victim's life ends on the shattered windshield of an out-of-control car, it's pure De Palma awesomeness. While it's not a perfect film this is supernatural spy-thriller has some nice horror elements and is worth a watch even if it struggles to maintain coherency from time to time.

Blu-ray: Earlier this year we saw a region-free Blu-ray of Brian De Palma's The Fury (1978) from US distributor Twilight Time that suffered from rampant film grain in the darker scenes, it was murky and the contrast was not great. Arrow Video have sourced a brand-new transfer from the original camera negative with an AVC encode on 1080p Blu-ray, and it's quite impressive when stacked-up against the Twilight Time Blu-ray with more robust colors and more natural skin tones, improved depth and clarity, it's quite impressive, fans are gonna be pleased.

Audio options include both the English 4.0 DTS-HD Master Audio and LPCM English 2.0 with Optional English Subtitles. I preferred the 4.0 with it's pleasing dynamic range, dialogue and effects are nicely balanced, plus it opens up the sound stage nicely. Dialogue is crisp and John Williams fantastic Bernard Herman-esque score sounds superb, compared to the TT Blu-ray the audio here is more intense,  we also have an isolated score and effects track to enjoy.

As with all of the recent Brian De Palma Blu-rays from Arrow we have a nice selection of Fiction Factory produced extras beginning with Blood on the Lens (27:00) an interview with Cinematographer Richard H. Klinehe speaks fondly of his only film with De Palma, remembering his experience on the set, setting-up shots, De Palma meticulous nature and commenting on the gorgeous cast, John Williams score and going into details about the specific scenes like the carnival sequence and the levitation scene.

Up next is Spinning Tale (13:38) with star Fiona Lewis who remembers the film as being ahead of it's time  and bearing the distinct De Palma stamp. She speaks briefly about her time on Roman Polanski's The Fearless Vampire Killers and A Day at the Beach with Peter Sellers and not wanting to do the film after reading the script until she met with De Palma, who impressed her.  She offers some great recollections of working with John Cassevetes who was cold and dry witted, working with Andrew Stevens and being battered over the course of 24 takes of being thrown to the ground repeatedly. 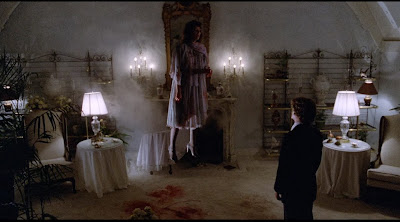 The most in-depth and rounded of the features would be The Fury - A Location Journal: An interview with Sam Irvin (49:49), who at the time of the film was intern and correspondent for Cinefantastique magazine. His recounting of his De Palma fandom and time on set working with the director and interviewing the cast is fantastic and offered a lot of behind-the-scenes info ranging from stealing the estate location from the Omen II production,the make-up effects, cut scenes, and differences between the book and film. Irvin is an unabashed De Palma groupie and was totally in love with Fiona Lewis, he would go onto direct and produce quite a few films of his own including Elvira's Haunted Hills and Gods and Monsters, the entire feature is quite a love-letter to De Palma and his film.


Not included with my review disc from Arrow but with the retail version are a reversible sleeve of artwork featuring original and newly commissioned artwork by Jay Shaw plus a booklet featuring new writing on the film by Chris Dumas, author of Un-American Psycho: Brian De Palma and the Political Invisible, as well as a re-print of a contemporary interview with Brian De Palma, and a brand new interview with screenwriter John Farris on the writing of the film, his and De Palma’s unrealised adaptation of Alfred Bester’s The Demolished Man and more, illustrated with original stills and posters.

This is a fantastic edition of a film that's received short shrift with previous DVD and Blu-ray incarnations, Arrow's Blu-ray have rectified that with a superb AV presentation with some interesting and in-depth supplement material, if you have not gone region-FREE here's yet another reason from Arrow Video to do so NOW!

Special Features:
- Brand new digital transfer of the film from the original camera negative
- Optional uncompressed mono 2.0 PCM and 4.0 DTS-HD Master Audio audio
- Isolated John Williams score
-Optional English SDH subtitles for the deaf and hard of hearing
- Blood on the Lens: An interview with Cinematographer Richard H. Kline (27:00)
- Spinning Tales: Fiona Lewis on starring in The Fury (13:38)
- The Fury - A Location Journal: An interview with Sam Irvin, intern on The Fury, author of the film’s shooting diary and then correspondent for Cinefantastique magazine (49:49)
- Original archive interviews from the 1978 promotional tour, featuring Brian De Palma (6:03), producer Frank Yablans (6:52) and stars Carrie Snodgress (5:06) and Amy Irving (4:45)
- Double Negative: A short film tribute to Brian De Palma by Sam Irvin, starring William Finley (17:58)
- Gallery of behind-the-scenes production images
- Reversible sleeve featuring original and newly commissioned artwork by Jay Shaw
- Booklet featuring new writing on the film by Chris Dumas, author of Un-American Psycho: Brian De Palma and the Political Invisible, as well as a re-print of a contemporary interview with Brian De Palma, and a brand new interview with screenwriter John Farris on the writing of the film, his and De Palma’s unrealised adaptation of Alfred Bester’s The Demolished Man and more, illustrated with original stills and posters.

Verdict:  Having just reviewed The Fury (1978) a few months ago I then stated it was not a top-tier De Palma but an interesting supernatural actioner mash-up, watching it again I was a bit more into it this time out, it's fun to see De Palma explore the supernatural themes of Carrie (1976), watching the new extras probably enhanced my viewing quite a bit, this gets a recommend. 3.5 Outta 5